It’s really odd that I’m only just started to think about executive function and how it does/does not impact on my life. Strange I know but I believe it’s because I’ve been so focused on sensory perceptual issues.

So I’ve been sitting spinning and as the wheel turns my mind whirs away too. To be honest my thinking hasn’t got me very far…not yet.

As a much younger person I was told I was very slow,  lazy, and that I never think. I remember clearly being told that my friend was a pleasure to teach as she only had to be shown once.  These words were so hurtful as I tried very hard and practiced diligently. The guide motto of ‘Be Prepared’ often came to mind. I would practice doing tasks or an activity to try and be quick and efficient as possible. Sometimes this was fun other times it just caused greater anxiety.

There’s lots to think about and ponder upon. I don’t want to hang on to all this stuff. I want to sort it out, see how it relates to me now, and then let it go.

So back to spinning… I start spinning or weaving or whatever and I just keep on going. I cannot stop easily to go and attend other tasks.

Here it is as a single ply on the bobbin… 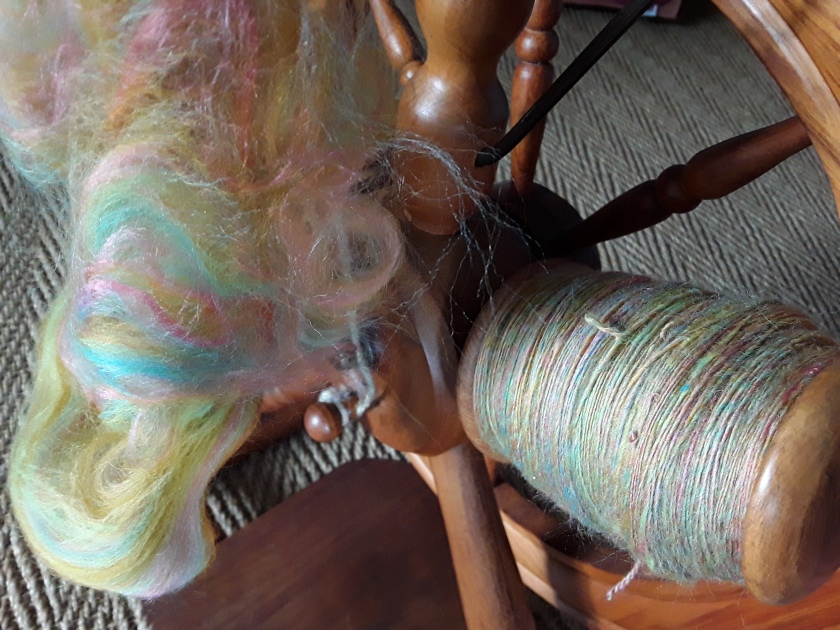 And finally wound into hanks…

The two hundred grams of merino/bamboo fibre after plying has made approximately 760 metres.

Now I shall go and reread all the stuff on executive function/dysfunction…again. Often I have to read a text many times before it starts to seep into my brain… and it has nothing to do with lack of intelligence.

Please leave a comment if you can recommend a helpful book. Thanks.

I'm a Christian on the autistic spectrum blogging about life and my art/craft practice. View all posts by yarnandpencil

4 thoughts on “Thinking about Executive Functioning”

Join 588 other subscribers
Follow yarn and pencil on WordPress.com