The following has been copied from Wikipedia…

Dunster Castle stands on a site which has been fortified since the late Anglo-Saxon period, signifying the importance of the area.[4] After the Norman conquest of England in the 11th century, William de Mohun constructed a timber castle on the site as part of the pacification of Somerset.[5]

A stone shell keep was built on the motte by the start of the 12th century, and the castle survived a siege during the early years of the Anarchy. At the end of the 14th century the de Mohuns sold the castle to the Luttrell family.[6]

Dunster had become a centre for woollen and clothing production by the 13th century, with the market dating back to at least 1222, and a particular kind of kersey or broadcloth became known as ‘Dunsters’.[4][7] The prosperity of Dunster was based on the wool trade, with profits helping to pay for the construction of the tower of the Priory Church of St George and provide other amenities. By the 15th century the importance of the town was declining particularly due to the silting up of the harbour.[4] The Luttrell’s wanted to maintain the importance as a market and in 1609 George Luttrell, of the Luttrell family constructed the market to shelter traders and their wares from the rain and provide more security for their wares.[4][8] The exact date of construction is debated and a variety of dates are given in different sources, however 1609 is considered the most likely.[3][4]

A second market cross, known as the Butter Cross, which was built in the 15th century used to stand near the Yarn Market but was moved to the outskirts of the village in the 18th or 19th centuries.[9][10][11] The Yarn Market is in the guardianship of English Heritage but is managed by the National Trust.[12] In 1951 the Ministry of Works took over various properties including the Yarn Market from the Crown Estate. They carried out restoration works, however this was controversial as the shape of the roof was changed to more closely resemble the appearance of the original building, rather than that produced by subsequent revisions.[13] 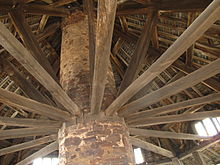 View of the supporting structure of the roof

The octagonal building, which is 9.4 metres (31 ft) in diameter, has a central stone pierwhich supports a heavy timber framework for the structure.[14] The slate roof has a central wooden lantern topped by a weather vane.[1] The roof is interrupted by a series of dormerwindows.[15] Around the periphery is a low wall and vertical timber supports.[2] Some of the sills are stone and others timber.[3]

One of the roof beams has a hole in it, a result of cannon fire in the Civil War, when Dunster Castle was a besieged Royalist stronghold for five months under the command of Colonel Wyndham.[16] Following the damage, it was restored in 1647 to its present condition by Francis Luttrell.[3]

Join 588 other followers
Follow yarn and pencil on WordPress.com